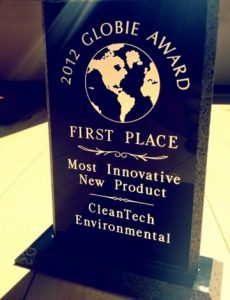 On Thursday, June 21st, Sierra Energy was one of 40 finalists showcasing their best innovations while competing for California’s “Most Innovative New Product of the Year” award.

Sierra Energy had six minutes to convince a panel of judges that its FastOx Pathfinder—a compact and modular waste gasification system that converts nearly any form of trash into renewable diesel—will change the world.

With the average American producing 102 tons of waste during their lifetime (the majority of which is sent to landfills), Sierra Energy’s FastOx Pathfinder allows communities to convert their waste into locally-made and used renewable fuels. Not only is this a more environmentally-sustainable option for waste, but it avoids expensive waste disposal and transportation costs and instead converts waste into valuable and sustainable revenue.

“Instead of allowing trash to waste away in landfills, our FastOx Pathfinder converts trash into power for our homes and fuel for our vehicles,” said Mike Hart, Chief Executive Officer of Sierra Energy. “We have a choice: we can either buy polluting oil from overseas or we can profitably create jobs in America by creating clean, and more efficient, energy at home.”

Sierra Energy expects to have its first commercial-scale FastOx Pathfinder operating in Northern California next year.

The Sierra Nevada Innovation Challenge serves as a public launch for products emerging from nonmetro
California. Awards were presented in each of five categories: clean tech and environmental;
health care and medical; agriculture and food; web and software; and manufacturing and high-tech.