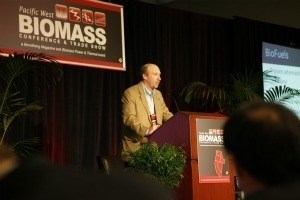 Hart was the keynote speaker at the third annual Pacific West Biomass Conference & Trade Show in San Francisco, Calif., Jan 16-18. He delivered a speech that emphasized the versatility of synthesis gas, as well as how the value of biomass—particularly municipal solid waste (MSW)—will drastically increase over the next couple decades.
Hart said he believes that over the next 15-20 years, trash will become a valuable commodity as waste conversion technologies become widely implemented. “As time goes on, we’re going to be buying it and making competitive bids,” he said, adding that feedstock flexibility will become a dominant factor in the biomass energy industry, particularly those that can utilize complex wastes such as MSW.From Hart’s perspective, a game-changing element of feedstock procurement is on its way: suppliers paying biomass plants to take feedstock, rather than plants paying to create their feedstock. As a focus on trash develops and it becomes a commodity, companies that designed technologies based on a specific feedstock that was typically free will realize the economics of their system no longer work. “This is because people with waste products will realize they have another product to sell,” Hart said. “My expectation is that we will see this with garbage.”
The concept raises an important question: who will be selling the garbage? Currently, four waste companies in the U.S. control the majority of the landfill market, which consists of just over 3,000 landfills, down from around 50,000 a few decades ago. “Those waste companies would like to continue to control this market, and they’re beginning to realize this is a potential new source of fuel for waste-to-energy and waste-to-biofuel technologies, but there are many new players in the game and they’re coming in with interesting new technologies to convert waste into higher-value commodities,” Hart said.
After discussing the most well-known conversion technologies during the past few decades—incineration, pyrolysis, anaerobic digestion, downdraft gasification, fluidized bed and plasma arc gasification—Hart said that for the last eight years, Sierra Energy has been working on a technology that can turn any feedstock into a common syngas, and find an end process than can convert it into any end product. The company has been testing its FastOx gasifier at a U.S. Department of Defense-funded renewable energy testing center in Sacramento, Calif., for the past couple of years. “It’s a five-ton-per-day system that can convert waste very efficiently,” Hart said.
Sierra Energy is commercializing a 10-ton-per-day system that it will be selling, and is also building a 50-ton-per-day facility in Sacramento that will take in trash, railroad ties, auto shredder residue and more, and convert them into electricity, ethanol, diesel, hydrogen and other energy products. “We want to do this with full participation and support of state regulators, and so far it’s been extraordinarily successful,” Hart said.