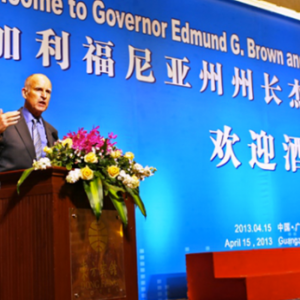 Sierra Energy’s CEO, Mike Hart, will be traveling with California Governor Edmund G. Brown Jr. to The People’s Republic of China to open a new California foreign trade and investment office and to encourage investment and trade opportunities between the two regions.

From Wednesday, April 10th through Tuesday, April 16th, they will be traveling through several cities including Beijing, Nanjing, Shanghai, Guangzhou, and Shenzhen.

The trip follows more than a year of significant diplomatic and business exchanges between the State of California and China. In February 2012, Governor Brown welcomed His Excellency Xi Jinping to California. During the visit, Governor Brown announced his intention to visit China to open a trade and investment office to drive more collaboration, investment, and trade between California and China. During January’s State Address, Governor Brown said, “We will take another step to strengthen the ties between the world’s second and ninth largest economies.”

Sierra Energy, a renewable energy and waste gasification company, is returning to China after a visit in August 2012 where the company met with several Chinese organizations and business leaders interested in licensing Sierra Energy’s FastOx waste gasification technology. FastOx gasifiers, derived from steel-making blast furnaces, convert nearly any form of waste into renewable energy through a thermo-chemical process.

With China being home to some of the most densely populated metropolitan areas, it is no surprise that the rest of the globe is watching to see how China alleviates the mounting waste disposal and air pollution issues plaguing its communities. Air quality in Beijing, a city of around 20 million people, has fluctuated between “very unhealthy” and “hazardous” levels since the beginning of the year. China intends to spend 100 billion yuan ($16 billion) over a three year period to improve sewage disposal, garbage treatment, and air quality. If China is successful in finding resolutions, the rest of the world will likely follow suit.

“Sierra Energy is in a prime position to help China reach its pollution reduction goals”, says Mike Hart, CEO. “FastOx waste gasification addresses both waste and pollution issues simultaneously and would set a global standard for how waste is handled.”

This, coupled with the recent closure of over 1000 blast furnaces in China, presents both environmental and economical advantageous opportunities for Sierra Energy.

Hart continues, “We are pleased to be joining Governor Brown’s Trade Mission and view it as a unique opportunity to engage California leaders in how we can work together, educate communities, and rapidly commercialize waste conversion, not only for export opportunities, but locally in California as well.”