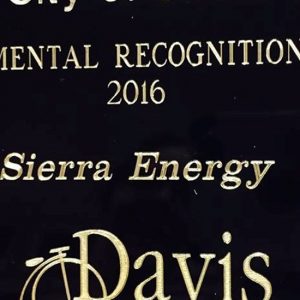 Sierra Energy began when Mike discovered FastOx gasification while serving as a judge in the UC Davis Graduate School of Management’s Big Bang business plan competition. FastOx gasification uses pure oxygen and steam to convert virtually any waste into energy-dense syngas that can be used to produce valuable energy products such as electricity, diesel, and hydrogen fuel, without burning.

The Environmental Recognition Award, awarded by the City of Davis, recognizes the environmental contributions of a local business. Sierra Energy received the award for advancing FastOx gasification, and its mission to eliminate landfills, reduce carbon dioxide emissions, and reduce our reliance on fossil fuels.

The Cool Davis Eco-Hero award honors citizens in the Davis community who are implementing innovative technologies and policies aimed at reducing our community’s carbon footprint. Mike is receiving the award for his work within the Davis business and environmental community as well as his continued vision for a zero-waste future.

“We are honored by the recognition our city has extended us,” says Hart. “Many of our competitors left California and recommended we do the same. Yet, this is my home and I believe when we implement this world-changing technology here, we can implement it anywhere.”

Both awards acknowledge the hard work and dedication to environmental stewardship reflected in Sierra Energy’s ongoing success. The awards also demonstrate the growing anticipation for the imminent commissioning of Sierra Energy’s first commercial demonstration facility in the fall.

Sierra Energy’s first commercial demonstration facility is currently under construction at Fort Hunter Liggett in Monterey County. The facility, in partnership with the Department of Defense and the California Energy Commission, aims to help the US Army reach their net-zero waste and energy goals, with subsequent plans to demonstrate low-carbon fuel production. Commissioning of the system will begin late this year.