TakePart.com Looks Toward a Zero Waste Future with FastOx Gasification 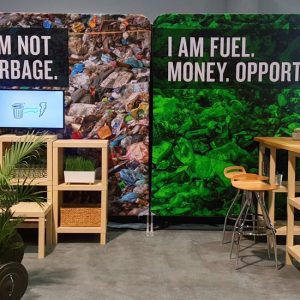 Kenneth Miller of TakePart.com visited Sierra Energy’s booth at WasteExpo 2016, and noticed that we do things a little differently. In a sea of booths touting status quo equipment for business-as-usual landfill operations, Sierra Energy’s FastOx gasifier offered waste managers a real, cost-effective solution to the waste industry’s emissions and environmental problems. The article focuses on what sets FastOx gasification apart from previous technologies, and dispels the myths that have settled on the industry.
Read an excerpt from TakePart.com’s feature below.

At WasteExpo 2016, the annual conference of the National Waste & Recycling Association, some 600 exhibits fill three cavernous floors of the Las Vegas Convention Center. Gleaming garbage trucks are on display, along with scrap metal shredders, conveyor belt systems, and pumps for spritzing deodorizer onto fetid landfills. Video screens show trash being sorted or baled, compacted or pulverized, by machines that resemble oversize Tonka toys.
The exhibitors are mostly male, and their fashion sense runs to the functional. Company-logo polos in cheerful colors predominate, tucked into khakis over middle-age paunches. But at the booth operated by a company called Sierra Energy, the vibe is different. The men’s shirts are black, and the tails hang over skinny jeans. There are women, too, in arty black dresses. The booth itself conveys an air of Zen-like mystery. What the hipsters are selling is nowhere to be seen. Instead, tufts of grass sprout from sleek pots on blond-wood tables. A banner shows tow views of a trash heap – one in its unlovely natural hues, the other in a soothing shade of green. Superimposed on the images is a kind of koan: “I AM NOT GARBAGE. I AM FUEL. MONEY. OPPORTUNITY.”
Sierra Energy makes a gadget known as the FastOx gasifier, whose effect on refuse is as transformative as the banner implies. “We think of it as molecular recycling,” says CEO Mike Hart, a trim, balding 54-year-old with a jazzman’s goatee and a calmly impassioned manner. Unlike ordinary recycling, in which objects made of metal, glass, or plastic become other objects made of metal, glass or plastic, the FastOx turns anything containing carbon – from orange peels to old tires to used syringes – into a blend of carbon monoxide and hydrogen. This syngas (the term for any gas synthesized from carbonaceous feedstock) can be burned to generate electricity or reformulated into biofuels or industrial chemicals. The hydrogen content can be used to power emission-free fuel-cell vehicles or small power plants.
The EPA calculates that gasifying 100 tons of waste a day instead of landfilling it could translate to a reduction of up to 66,000 tons of CO2 a year – the equivalent of taking 14,000 cars off the road by using the trash of a medium-size suburb. “I’m bullish on this technology,” says Chip Comins, chairman and CEO of the nonprofit American Renewable Energy Institute, which promotes the use of sustainable power sources. “I have high hopes that its time has come.”

Click the link below to read the full article:
Turning Trash Into Gas May Finally Be a Thing