CEO Mike Hart featured in Crain's If I Knew Then... article series 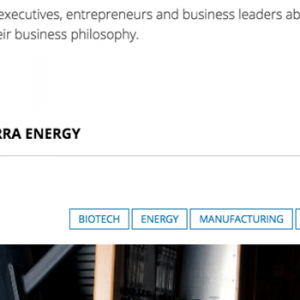 Crain’s Sacramento featured Sierra Energy CEO Mike Hart in the If I Knew Then… series, where they ask executives, entrepreneurs and business leaders about mistakes that have shaped their business philosophy.

“The Mistake: Back in the early 1980s, I used to drink a can of Coke every day at lunch. But then I decided I didn’t want the sugar, so I had the idea of putting water in a can, or even a bottle, and trying to sell it.

I found out that the government does canned water for emergency rations, so I knew there were canning lines that could do it. I wanted to do something similar commercially and call it “Can-teen.” I just simply wanted to try to get into the business. I started talking to major beer bottling companies and asked if they would be open to the idea. I got shot down everywhere I went. The common refrain I heard was, “No one would ever pay for water – it’s free.” Ultimately, I decided that I should listen, because these people were the experts and knew what they were talking about. I gave up.”

Read the article in its entirety here: http://sacramento.crains.com/if-i-knew-then/mike-hart/sierra-energy