Explore the five isles of FastOx systems and the possible configurations.

Components of a complete FastOx system 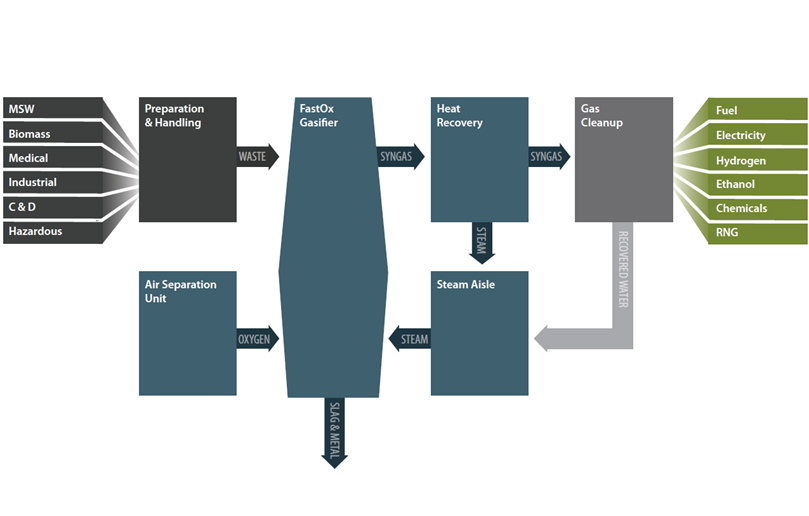 These components can be summarized as component isles: preprocessing, gasification, additional gas cleaning (if needed for back end system), utilities sub-system, and back end system.

Continue reading for a more detailed description of the complete gasification system.

After waste materials are delivered to the site, they are sent to a shredder and sized appropriately for the diameter of the gasifier (for more information, please see Feedstock). The FastOx gasifier requires minimal pre-treatment of feedstock because it can handle high-moisture contents (up to 50% by weight.) Competing technologies, such as fluidized bed gasifiers and other downdraft gasifiers, require extensive feedstock handling processes to dry the waste streams to a maximum of 10% to 20% by weight.

After the waste is shredded, it is fed into the top of the FastOx gasifier via conveyor belt. At the top of the gasifier, the waste is held in an airlock chamber prior to discharging into the vessel. The residence time of feedstock is controlled by the supply of injected oxygen and steam at the bottom of the gasifier. By injecting oxygen, FastOx gasification increases efficiencies and avoids many of the environmental impacts associated with iron-making blast furnaces, which commonly inject nitrogen-rich ambient air.

Next, the waste descends through the gasifier by gravity through four reaction zones: drying, devolatilization, gasification, and melting. The process produces high-quality syngas, liquid metal, and inert stone. The syngas rises up to the top of the vessel and moves on to the syngas conditioning process, while the molten liquid metal and vitrified stone descend to the bottom of the gasifier.

Once it has left the gasifier, the syngas enters into a polisher that converts any trace organic compounds into additional syngas. Next, a waste-heat boiler (heat exchanger) removes excess heat from the shifted syngas and creates high-pressure steam. The steam is recycled back into the steam isle and re-injected into the gasifier. The steam is continuously controlled to provide the right ratio of hydrogen to carbon monoxide in the outlet syngas. Syngas then goes into the gas-cleaning isle that removes all particulates and gaseous contaminant matter to meet the requirements of subsequent syngas-to-product conversion processes.

At the back end of a FastOx gasification system, the clean syngas is further processed to produce high-value end products, such as electricity, biodiesel, hydrogen, and RNG. To learn more about the possibilities of our back end syngas processing, visit our valuable end-products page.

The purpose of the preprocessing subsystem is to adequately condition waste in preparation for gasification. FastOx gasifiers accept nearly any kind of waste (view acceptable waste types here). Our systems can also handle upwards of 50% (by weight) moisture content in the incoming feedstock.

Sierra Energy generally aims for its gasifier feedstock to contain 20% moisture by weight and size according to the dimensions of the gasifier. For example, feedstock for a 10 metric tons per day unit should be less than 2 inches in size.
Given that waste streams are as diverse as the regions they come from, preprocessing requirements will vary widely. However, most preprocessing systems will operate in three stages – separation/sorting, processing, and storage and metering.

The storage and metering stage physically transports waste from storage containers into the gasifier and accurately monitors the feed rate.  Waste will be stored appropriately in a manner that is safe, adequately sized given the waste acceptance and processing capacities, and does not subject waste to conditions that would require additional pretreatment. The exact capacity of the storage will be dependent on the size of the system as well as the nature and frequency of waste being received onsite. Examples of waste storage equipment include:

Typically, a good rule of thumb for continual operation is to size feedstock storage for at least two days of inventory. This is to ensure continual operation in case the feedstock supplier cannot deliver the waste in two consecutive days, during atypical business hours, or during the weekend.
Waste will be moved from the storage section into the gasifier by use of conveyor belts and the feed rate of waste will be closely monitored to ensure proper and optimized operation of the gasifier and back-end processes.

The FastOx gasification isle consists of the following:

The gasifier vessel’s structural components are predominately composed of the metal shell, refractory, cooling plates, and taphole. The exterior shell is comprised of carbon steel. The shell’s interior is lined with refractory. The refractory is split into three sections to accommodate the various temperatures and operating conditions seen throughout the vessel. Refractory type of each zone is chosen based on that zone’s requirements.

The cooling plates are present to help regulate the gasifier vessel temperature, providing one of two temperature control methods.  The second cooling method employed is steam injection, which can moderate temperature gains caused by the oxygen injection.

Each gasifier is equipped with a taphole for the purpose of removing molten vitrified stone from the gasifier base. Simply opening the taphole allows for the inert stone to flow out due to the low viscosity of the molten vitrified stone as well as the slightly higher pressure inside the gasifier. The metals and inorganic materials separate in the collector due the comparatively higher density of the metal.

In some cases, it may be strategic to employ the use of a continuous tapper, which allows for a constant, steady state flow of inert stone from the system. The continuous tapper would attach to the taphole, and the molten inert stone products and metals would flow into a water bath for cooling. Alternatively, they could be air cooled. The best method to use will depend upon the exact nature of the project in question.

Unlike conventional gasification, which typically injects atmospheric air (composed of 78% nitrogen) that dilutes and impedes the system, oxygen and steam are the only injectants of the FastOx gasifier. This has several favorable effects on the gasification process:

Oxygen can be purchased or generated from atmospheric air using a cryogenic air separation unit (ASU). Unlike the plasma arc gasification technology, FastOx gasifiers release energy from the reaction between the oxygen and residual char. Thus, the only electricity required is that to power the ASU.

Steam can be self-sufficiently generated by the FastOx system by utilizing both recovered water and recovered sensible heat from hot syngas. The recovered water (moisture) is removed from the incoming waste streams in the “drying” zone. Water is separated from the syngas in the gas cleaning isle, and recycled back to the FastOx gasifier’s steam feed.

The extent of the impact of these steam-recycling methods will be highly dependent on the initial moisture content of the feedstock in question. It is most likely that the steam recycling will help reduce the amount of water being pulled from the grid, rather than replacing it all together.

In a FastOx system syngas flows directly from the gasifier into the polisher unit.

The purpose of the polisher is to further react condensable hydrocarbons present in the syngas into additional syngas. This not only removes the possibility of the compounds condensing out in low-velocity and/or low-temperature zones (which could lead to a build up) but also increases the volume of usable syngas available for conversion to end products.

Like the gasifier, the polisher is lined with refractory materials and encased in a metal shell made of steel. The polisher is also equipped with a tapping system to remove the inert stone that will collect at its base.

The gas cleaning and conditioning stage contains all of the equipment and subsystems to adequately clean and prepare the syngas to meet the specifications for the desired end-product.

Additional gas conditioning and preparation is required only for the production of hydrogen, Fischer-Tropsch (FT) liquids, and certain chemicals. This equipment is not required for the production of electricity via gas turbines or reciprocating internal combustion engines, which are already included in the system. Each end product requires specific conditions of syngas in order to process it. For example, the Fischer-Tropsch process does not permit even trace amounts of hydrogen sulfide present in the syngas stream because it will cause rapid degradation of the catalyst.

For most end products, a specific amount of hydrogen is required. To meet this requirement, syngas is moved to the gas conditioning and preparation unit after cleanup where it is compressed and mixed with high-pressure saturated steam and fed into the Water-Gas Shift (WGS) reactor where the following reaction takes place:

The amount of steam injected into the WGS reactor is continuously controlled to provide optimal hydrogen to carbon monoxide ratios (H2/CO) in the outlet syngas. The WGS reaction is a mildly exothermic reaction and excess heat is removed from the shifted syngas with a waste-heat boiler (heat exchanger) that makes high-pressure steam.

Excess hydrogen from the post-WGS is removed via a hydrogen membrane module. The hydrogen is then transferred to a pressure swing adsorption (PSA) module for purification.

After cleanup, syngas can be converted into numerous renewable energy products through the following syngas utilization technologies:

A combined-cycle power plant utilizes a gas turbine to produce electricity from a generator attached to the gas turbine shaft. This first ‘Brayton Cycle’ gas turbine recovers approximately 25–30% of the chemical energy in the syngas as electricity with a large volume of high temperature exhaust.

Installing an additional ‘Rankine Cycle’ Heat Recovery Steam Generator (HRSG) can recover and additional 15–20% of the chemical energy in the syngas to produce high-pressure steam from the gas turbine exhaust. A steam turbine attached to another generator produces a second electrical product stream. The combination of both the gas turbine and HRSG gives the combined cycle close to 45% efficiency. This is significantly more electricity per tonne of waste compared to a conventional IC engine generation set.

The Fischer-Tropsch or FT system converts syngas through a series of chemical reactions over a catalyst (typically cobalt and iron) to produce sulfur-free and aromatic-free renewable diesel. The diesel we produce is twenty times cleaner than the ultra-low sulfur diesel standards in California.

When aiming for long-chain products such as renewable diesel, FT synthesis requires typical operating conditions of temperatures of 200–250°C (400-480°F) and pressures of 25–60 bar. The polymerization-like chain growth reaction results in a range of products comprising light hydrocarbons, liquefied petroleum gas (LPG), naphtha, diesel, and wax fractions. The distribution of the products depends on the catalyst composition and the process operation conditions.
In general, the discharge of the FT reactor contains byproduct water (pressurized to stay in the liquid form), low molecular weight hydrocarbons (gases), and a wide range of liquid hydrocarbons that include naphtha, diesel, and wax cuts. A three-phase separator on the discharge end of the FT reactor separates the gases, the liquid hydrocarbons, and the water. The tail-gas can be recycled to the FastOx gasifier or used to generate additional electricity on site. The almost-pure water is cooled and used within the plant and the liquid hydrocarbons continue on to the fractionator. The fractionator then separates appropriate fractions of the liquid hydrocarbons leaving the final desired product in the proper quantities.To learn more about the production and economics of diesel through FastOx gasification, click here.

The following are examples of ancillary utilities that would be required at a waste processing facility, note that some of these may already exist onsite if the FastOx system were to be placed at an existing industrial site: