Discover the history, evolution, and future of FastOx gasification.

From 2009 to 2013, Sierra Energy developed and validated its technology at the Renewable Energy Testing Center (RETC) located at the McClellan Air Force Base in Sacramento. Using start-up funds from the Department of Defense (DoD), we set out to validate our heat and mass balance (H&MB) model for multiple feedstocks and emission profiles.
In the year prior to the shutdown of the RETC facility, Sierra Energy acquired over $10 million in project funding by the DoD and the California Energy Commission (CEC). Since, Sierra Energy has directed all of its efforts towards building its first demonstration facility in partnership with the U.S. Army at Fort Hunter Liggett. 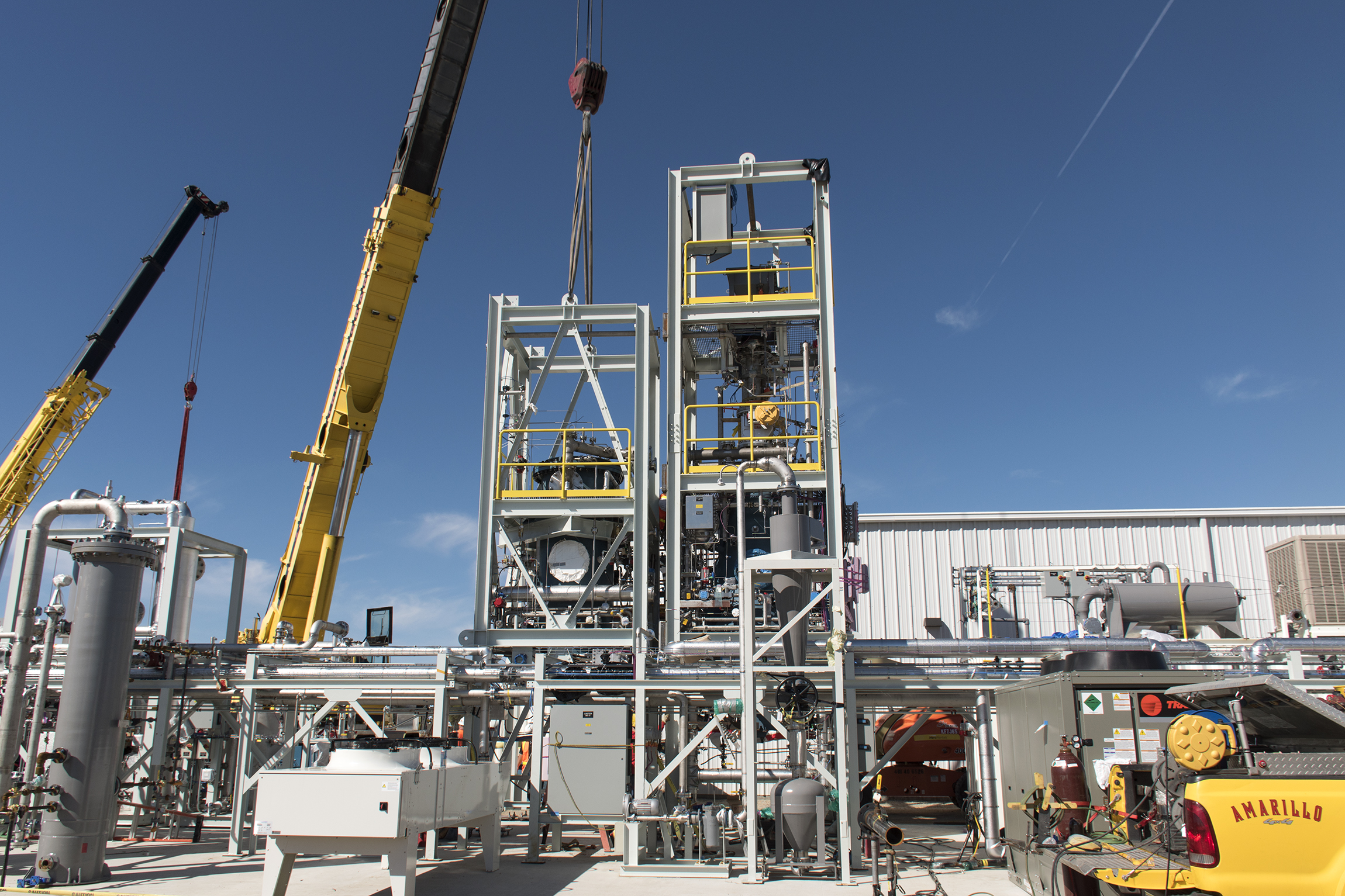 Sierra Energy partnered with the US Department of Defense to test the initial iterations of the FastOx gasifier. This testing ultimately led to the creation of a prototype system referred to as Mk4. This successful proof of concept serves as the basis for our first demonstration facility being built at Fort Hunter Liggett in California.

The RETC program was based on the concept of testing and validation of renewable energy technologies related to biomass feedstock with a particular focus on biofuels for transportation.  Technikon had a world-class research, demonstration and deployment facility located in the greater Sacramento, California region that was being utilized for this initiative prior to shut down in August of 2013. The RETC program focused on support of relevant and emerging renewable energy technologies in the area of cellulosic waste and biomass to energy conversion technologies that would support DoD compliance requirements to Executive Order 13423. This order set goals for the DoD to increase alternative fuel consumption by at least 10% annually.
The objective of the RETC was to provide the industry with an independent measurement laboratory for evaluating the performance of renewable energy and renewable fuels technologies with respect to robustness, safety, energy efficiency, environmental effectiveness and other key performance specifications. The RETC and the oversight of the RETC staff brought together technology developers, government entities, and universities in a facility that allowed the kind of testing needed to bring renewable energy systems to the demonstration phase. It also allowed developers to integrate technologies for a complete waste-to-energy system at an accelerated pace and significant cost reduction. Present state and federal grant structures are less flexible and sometimes prohibit smaller developers from applying for awards since they do not have the data needed to win them.  The RETC filled this gap in funding and accelerated renewable energy demonstration.

Sierra Energy has been scaling up testing of FastOx gasification since 2004 using prototypes developed at the RETC. Through this time, significant progress was made towards municipal solid waste processing, reaching up to 5 tons per day. To ensure the protection of its intellectual property, Sierra Energy has secured patents in 34 countries and obtained numerous analyses and validations from experts in the energy, power, and steel industries.
Prior to the current design, the Mark 4 (Mk4), FastOx gasifiers went through three iterations. These iterations, or testing phases, are depicted in the picture below, with the first testing unit (Mk1) at far left. 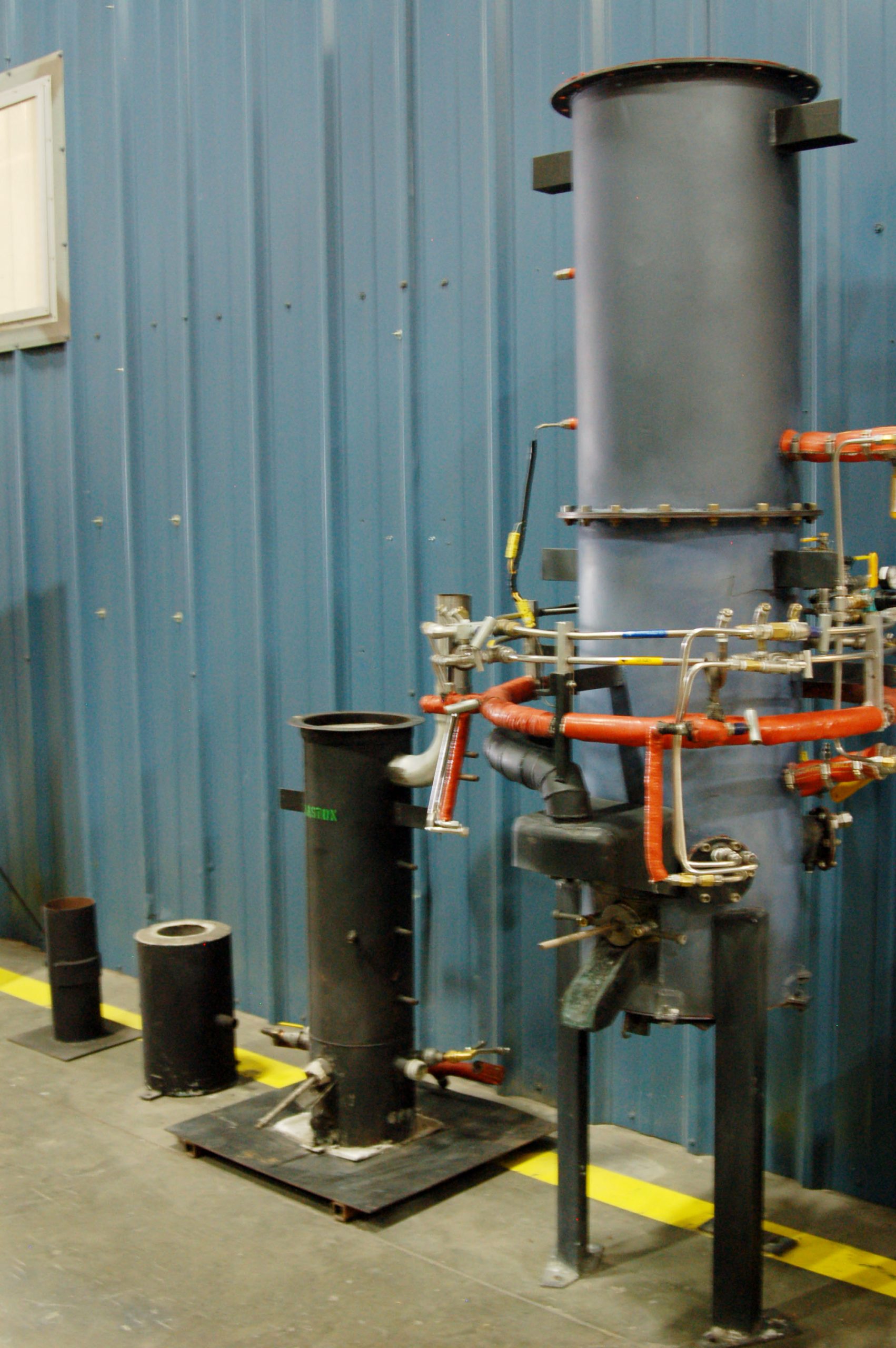 The development background for our testing units–Mk1, Mk2 and Mk3–can be summarized as follows:

Mk1 is the first testing unit. Sierra Energy has built this unit to investigate and optimize tuyere integration with the gasifier shell. The testing revealed that a consistent syngas could be produced even with a single tuyere.

This unit was built to observe reactions occurring inside the refractory-lined vessel, to incorporate multiple injection nozzles, and to augment instrumentation and operation procedures. The testing resulted in promising efficiency comparison between the injection of compressed air and co-injection of oxygen and steam.

This unit (depicted below) was designed to incorporate an air-lock charging system, a burden height measurement system, and piping the syngas to a side flare. It provided data on syngas composition and validated the heat and mass balance model generated by third-party experts.

The testing led to a technical white paper authored by the RETC which demonstrated:

The pilot FastOx gasifier, called Mark 4 (Mk4) was designed and tested to validate and optimize the core FastOx gasification innovations focusing on gas injection, controls and methods of process operation, vessel geometry, and management of feed material, ash, and inert stone. The Mk4 (depicted below) had a capacity of approximately 5 metric tons per day (depending on density of feedstock).

This functional prototype unit was designed to test the conversion of multiple waste streams and the composition of the resulting syngas, automatically remove (tap) molten vitrified stone and metals from the gasifier, trouble-shoot operation logistics, and collect data to assist with further system automation.
Sierra Energy also installed a flare and heat exchanger allowing Mk4 to operate continuously during extended runs. Mk4 successfully produced and removed molten metals and inert stone. Mk4’s resultant inert stone products underwent independent testing—using U.S. EPA “Toxicity Characteristic Leaching Procedure (TLCP)” methods—which showed that waste from any source produces a non-hazardous inert stone and may be sold as a safe building product. The company also worked with the University of California, Davis, on the design of an isokinetic sampling skid to collect condensable hydrocarbons, particulates, moisture and other trace gas constituents.

It was important for Sierra Energy to gather gasification data results from municipal solid waste (MSW) compositions that represent the core of American waste. Our MSW composition was the chemical equivalent to the post materials recovery facility (MRF) national average.
Additionally, Mk4 demonstrated that it could gasify high-moisture feedstock (up to 55% moisture content) without any pre-treatment.
The theory behind FastOx gasification applies regardless of scale even though the relative heat loss increases as the vessel size increases.  Thus, our large scale systems can handle this level of moisture as well.

ESTCP Installation Energy Program: A Department of Defense (DoD) funded program purposed to accelerate the deployment of innovative energy technologies targeting DoD needs in environmental, energy, and economic performance. A total of $3.0 million has been awarded to Sierra Energy to evaluate the benefits provided by an onsite waste-gasification system to generate distributed power in an operational, fixed-installation setting.
Alternative and Renewable Fuel and Vehicle Program: These awards are provided through the California Energy Commission’s Alternative and Renewable Fuel and Vehicle Technology Program. The program provides funding to encourage the development and use of new vehicle technologies and alternative fuels to help the state fulfill its climate change policies. A total of $5.0 million was awarded to Sierra Energy to develop and demonstrate a waste-to-energy solution to produce ultra-low-carbon renewable diesel, creating a model for sustainable diesel production.