A brief overview of how FastOx gasification compares to other waste conversion technologies.

How does FastOx gasification compare? 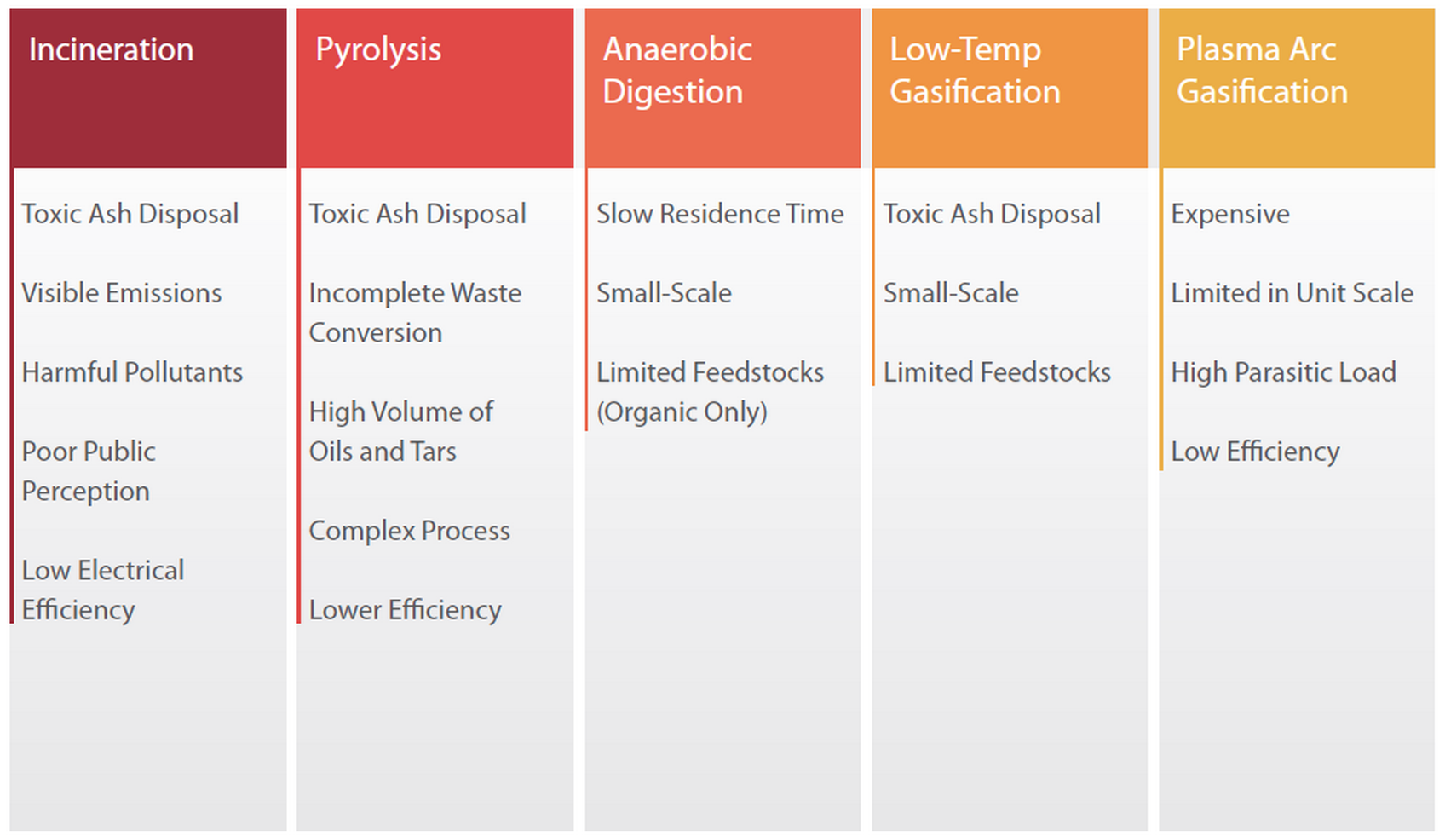 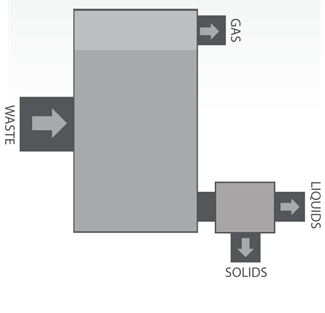 Anaerobic Digestion (AD) uses microorganisms in a low-temperature, oxygen-free environment to break down biodegradable material. Thus, AD reactions are the result of organic metabolic processes rather than complex chemical reactions. Digesters produce methane (CH4) that can be harvested for processing into higher value products such as electricity or diesel.  Also, microorganisms require a moist environment to thrive and are therefore well suited to processing very wet waste streams (moisture greater than 40%).
While AD effectively breaks down organic waste, it requires extensive front-end processing to remove inorganic materials and items that might prove toxic to the microorganisms. Maintaining optimal conditions for the microorganisms requires extensive oversight. Additionally, the primary byproduct of AD is a fertilizer, which does not provide a significant source of revenue.

Combustors/incinerators operate at relatively low temperatures in an oxygen-rich environment that only allows feedstock to burn creating substantial volumes of exhaust gas, five times the volume created by gasification. The visible emissions and toxic pollutants produced by this technology have given it a bad reputation.
Burning also produces hazardous ash, both as a solid that collects at the bottom of the incinerator and as particulates in the flue gas. This ash must be collected and disposed of in hazardous waste landfills as it contains leachable heavy metals.
Combustors/incinerators are also a concern because they form and re-form toxic dioxins and furans (especially from PVC-containing plastics) when burned. These toxins end up in combustor/incinerator exhaust in three ways: 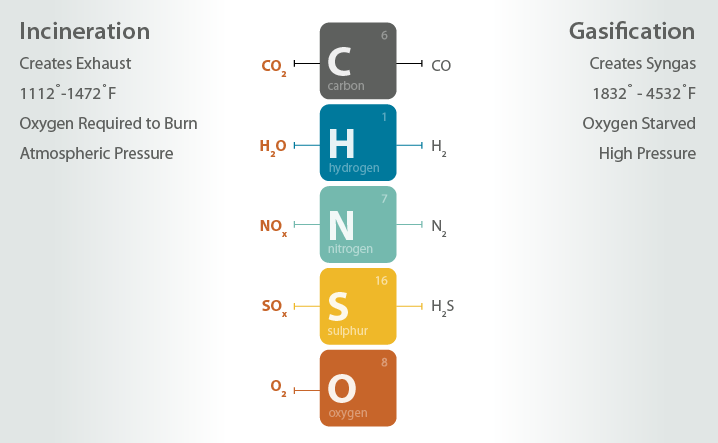 Contrary to incineration, gasification restricts available oxygen and thus does not burn. Therefore, resultant syngas contains virtually all of the energy in the original feedstock. This efficiency allows syngas to be upgraded to transportation fuels offsetting the use of fossil fuels, another superiority over incineration. The Gasification Technologies Council identifies in detail the certain formation and reformation of toxic dioxins and furans from plastics and other materials as another chief disadvantage of incineration.
The California Integrated Waste Management Board, the predecessor to Calrecycle, stated in a Report to the Legislature that, when compared to incineration, gasification technologies:
• Produce more energy
• Produce fewer emissions of criteria air pollutants
• Produce lower emissions of CO2
Further research corroborates these results. The table below shows the significant reduction of pollutants when switching from incineration to gasification.
Table 1: Emissions of Gasification versus Incineration

The large volume of hot exhaust coming from an incinerator can be used to generate a relatively small amount of steam for electricity production. However, it is very difficult to clean the exhaust prior to being emitted into atmosphere.
Figure 2: Incineration vs FastOx® Gasification 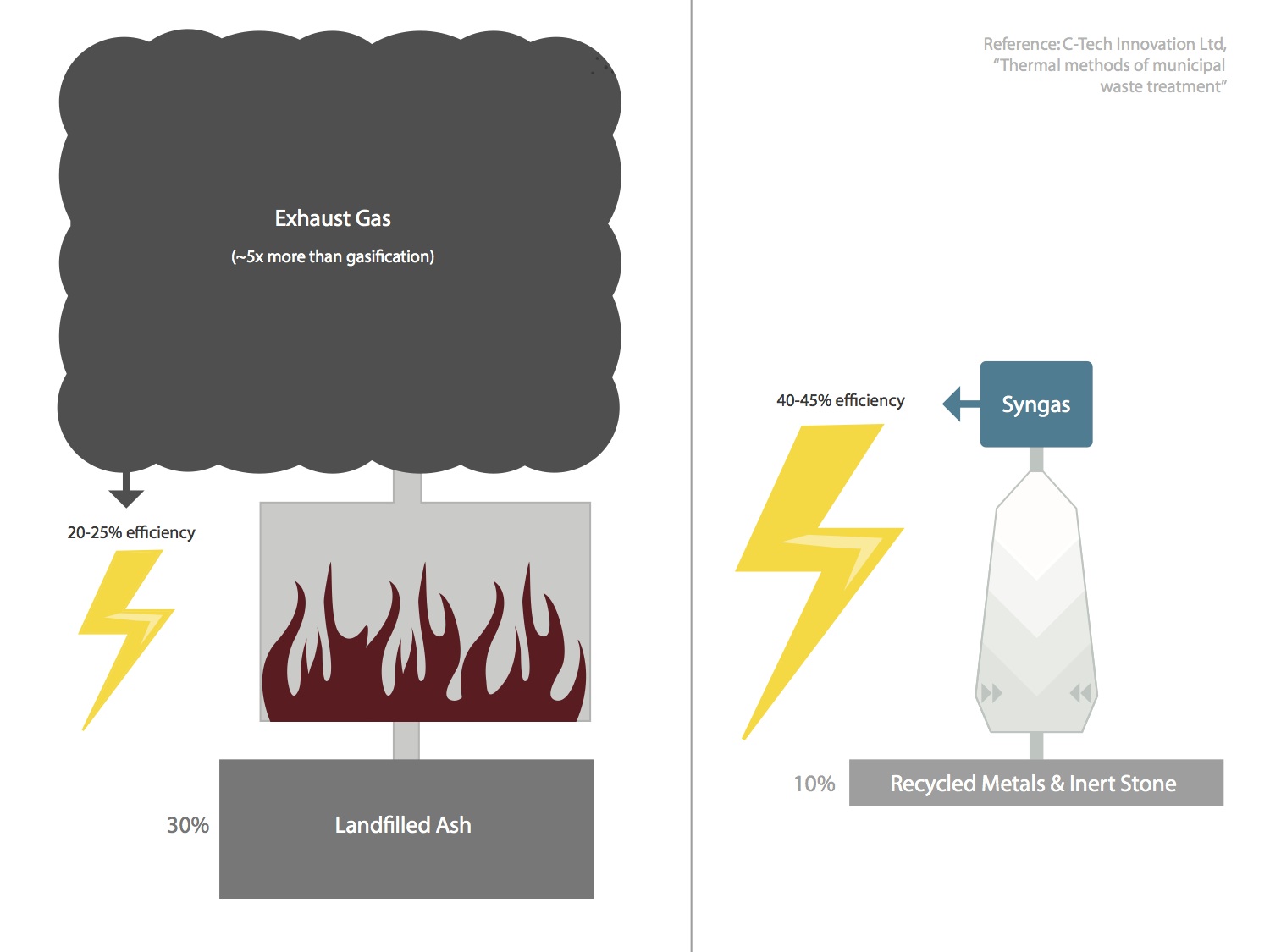 Due to its rudimentary and incomplete transformation process, incineration has very low electrical efficiency (significantly lower than both natural gas and coal-fired power). Electrical efficiency represents how much of the original energy is actually transported into the grid as electricity. Table 2 (below) shows a clear disparity between incineration and gasification. Figure 2 (above) visually identifies these key differences.
Table 2: Electrical Efficiency of Gasification versus Incineration

To elaborate, the limitations of incineration include toxic ash disposal, emissions of harmful pollutants, bad public reputation, and low efficiency.
The process of incineration burns waste at relatively low temperatures in an oxygen rich environment. The low temperature nature of the process allows for waste to not completely break down at the molecular level, thus causing a residual residue (i.e. ash) to remain as a result of the process.
This residual is generally a mixture of heavy metals and inorganic materials that typically form toxic compounds. These toxic compounds are hazardous to their local surroundings, and thus require further disposal, often in a landfill.
In addition to the residual leftover from the process, the actual conversion of waste to gas produces harmful pollutants as a result of several factors. The low temperatures of the process do not allow for the complete breakdown of certain components into fundamental and simple molecules (such as carbon monoxide). Instead the partially broken compounds join with other partially broken compounds to form complex compounds that are harmful to the environment. It is these complex compounds that form the bulk of the “smoke” or exhaust coming from the incineration process.
Typically, the injection of air into these types of processes contributes significantly to the ensuing emissions issues as the presence of nitrogen leads to the production of even more harmful substances (i.e. NOx).
Incineration involves a combustion reaction between carbon and oxygen to form carbon dioxide. The heat produced from the process contributes to the partial reactions in the local surroundings that contribute to the nasty pollutants created by the process. 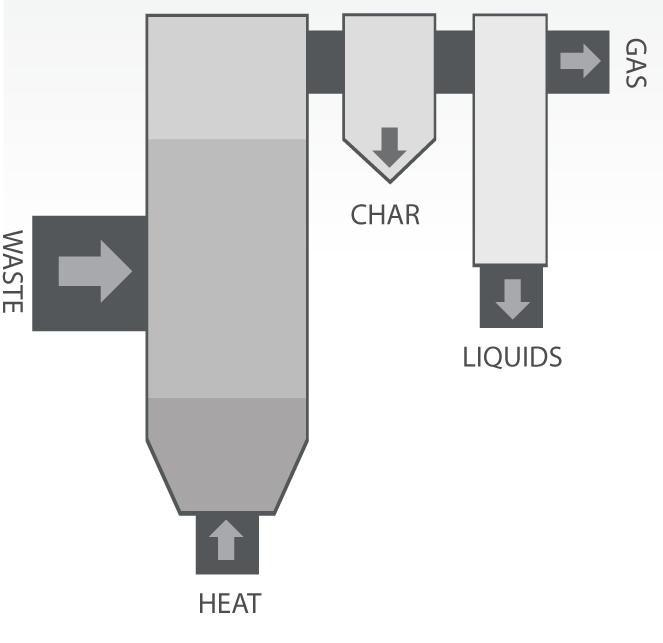 This technology indirectly heats organic matter in an oxygen-starved environment. The process produces gases, a liquid called pyrolysis oil, char material, and ash. The fact that oxygen is not abundant during the reactions means that it is significantly more likely that complex compounds form, such as oils and tars. The nature of this occurrence is fundamentally complex and inefficient. The ash created is also hazardous and requires special handling and disposal.
Pyrolysis units cannot handle high moisture, requiring expensive pre-process drying equipment. Additionally, pyrolysis units can only process organic feedstocks and have unit capacity limitations. 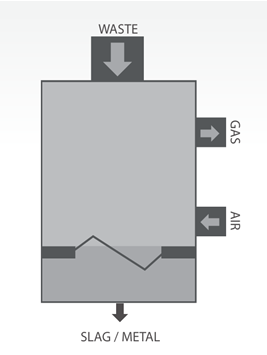 Plasma is the only technology that has most of the same capabilities as FastOx gasification, in that it can create the same type of product (high quality syngas) from the same types of waste (i.e. has same feedstock flexibility). The limitation of this technology comes from its operations rather than its capabilities. Plasma arc relies on its energy input form an electrical arc produced by running a high-voltage current between two electrodes at the base of the gasifier. This arc is the single source of energy input into the process, allowing it to achieve the desired temperature necessary for the complete/fundamental/ molecular breakdown of waste.
Although it has the same capabilites as FastOx gasificaiton, its limitation comes in the form of the operational requirements. Because plasma relies on and electrical current as its source of energy input, it requires a large amount of electricity in order to operate. This simplest and most straight-forward means of acquiring this electricity is by pulling it from the grid, which can become very expensive. For this reason, the operational costs of Plasma arc gasification vastly exceed those of FastOx gasification.
Ultimately, Plasma arc gasification is not an economically efficient enough process to make sense in the majority of waste-processing scenarios. This is why FastOx gasification is superior.
There are many companies out there who have explored the realm of waste gasification to some extent. Those that are still around have found that their technologies work within a specific niche of waste processing, such as being limited to the processing of organic waste only or the fact that they are not a complete conversion process. While FastOx gasification represents, in principle, a unique single-solution to the vast majority of waste-processing issues, there do exist certain technologies that are more well-suited to specific scenarios. For this reason, it is worthwhile to explore all the options in order to find that which suits your needs best.
An example of this is if you had a waste stream comprised entirely of pine nuts. This type of waste stream would be ideally suited for a pyrolysis type of treatment, given the relatively low complexity of the process.