The Diverse History of Gasification

The processes of producing energy via gasification have been in commercial use for more than 180 years. Earlier gasification technologies included the production of town gas for lighting using peat and coal as feedstocks and the production of fuels from wood to power motor vehicles during World War II. Today, the gasification process is most commonly associated with the centuries-old blast furnace.

A blast furnace is a type of metallurgical furnace traditionally used to extract metals, generally iron, from ore. Blast furnaces have been around for centuries, with the earliest models developed in the 1st century BCE. Sierra Energy derived its FastOx gasification system from blast furnace technology.

What is a Blast Furnace?

How Does a Blast Furnace Work

Blast furnaces are refractory-lined vessels used to convert iron ore into molten iron. Driven by gravity, they work in a counter-current manner: iron ore, metallurgical coke, and limestone are fed into the top of the furnace and hot air (the “blast”) is blown into the bottom of the furnace. The materials fed into the top of the furnace gradually descend as the hot gases rise through them.
The chemical process that occurs is called “reduction” (the opposite of oxidation). In this process, oxidized iron ore (essentially rust) is stripped of its oxygen molecules and converted into elemental iron with the use of carbon as a reducing agent. This reduction happens slowly as the iron ore descends through the furnace, emitting gases until it reaches the “bosh” zone near the bottom of the furnace where the iron ore melts completely. At this point, the liquid iron is “tapped” from the bottom of the furnace and poured into casts and sent to a steel mill.
The low-value gases produced in the blast furnace are typically extracted at the top of the furnace and burned to heat the air blasted into the furnace.
Carbon is used as a reducing agent; it combines with the Oxygen (O2) to form Carbon monoxide (CO) and eventually Carbon dioxide (CO2). The main carbon-bearing material used in traditional blast furnaces is coal, sometimes transformed into coke, which also serves to generate the high temperatures needed to smelt the iron ore.

Blast furnaces have been built in a wide variety of sizes and represent an efficient process even when operated at low capacities. The world’s biggest blast furnace would be capable of converting approximately 30,000 metric tons of waste per day. 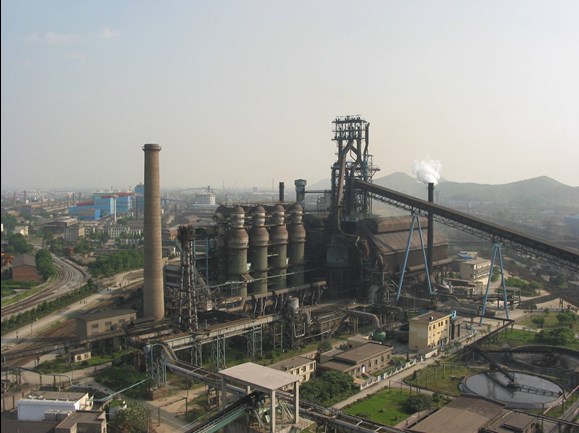 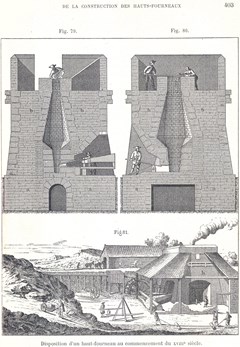 The Han Dynasty of China developed the first known blast furnace in the 1st Century BCE. Originally, they were constructed out of phosphorous-rich clay and used to produce cast iron for farm tools and weapons. By the 3rd century BCE, piston-bellows, a device powered by waterwheels and used to blow air across the reaction sites, were developed for utilization in the blast furnace, greatly enhancing its efficacy. By the 5th Century BCE the technology was widespread.

During the Song Dynasty in the 11th century AD, a switch in materials from charcoal to bitumious coal helped increase the production of casting iron and steel.
The Great Leap Forward (a period of modernization between 1958-1962) saw large increases in the production of steel as China industrialized its society.

Blast Furnaces in the United States

The United States was a preeminent figure in the history of modern steel production and blast furnace technology. In 1901, the US was the world’s largest steel producer, with the company US Steel producing roughly 66% of the nation’s output. The corporation employed 168,000 people and owned 213 manufacturing plants, forty-one mines, and almost one thousand miles of railroad.

In 1920, the US was the world’s biggest manufacturer of steel, producing 60 million tons annually. However, since the 1960s, the US steel industry has faced a steady decline and many blast furnace factories have since been shut down. 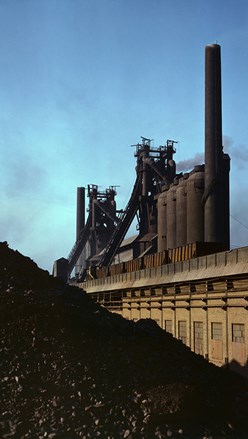 While there are many more steel producers operating in the US, the companies listed above are the only operators using blast furnaces. Many companies presently use electric arc furnace methods.

The conventional blast furnace, like the majority of industrial processes, is a significant source of CO2 pollution. Global steel production accounts for approximately 5% of total world greenhouse gas emissions.

In an industry where product quantity is measured by the millions of tons, but quality is measured by the millionth of an inch, engineers at Kaiser Steel explored methods to produce iron more efficiently. They ran theoretical models for injecting pure oxygen instead of ambient air. Soon, they began thinking outside of the box and realized their modifications could widen the feedstock complexity and process waste. Thus, the FastOx® gasifier was born as a modern innovation to a long-established technology.

Sierra Energy has researched, validated, patented, and developed this method confirming that FastOx gasifiers operate more efficiently and increases the value of the fuel-gas produced. These innovations allow FastOx gasifiers to produce syngas with high enough energy content to power a combined cycle turbine and clean enough to be used in renewable fuel production.

The Current State of Gasification

Currently, there are more than 272 operating gasification facilities worldwide, with a total of 686 gasifiers. In addition, there are 95 proposed gasification projects having commercial potential across the globe, with 23 active projects in the US alone. The majority of these systems are coal gasifiers.
Gasifiers intended for waste conversion can be classified into two groups: low-temperature gasifiers without the ability to vitrify stone (operating at temperatures less than 1,260°C/2,300°F) and high-temperature gasifiers with the ability to create inert, vitrified stone (operating at temperatures 1,260°C/2,300°F and above).