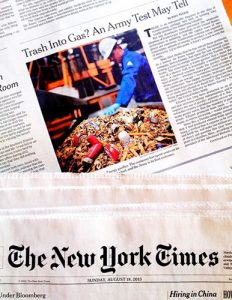 The New York Times printed Sierra Energy’s story in the August 18, 2013, Sunday Business Section. The article discusses how FastOx can impact the Department of Defense and the success Sierra Energy has accomplished thus far.

THERE is an indisputable elegance to the idea of transforming garbage into fuel, of turning icky, smelly detritus into something valuable.

But big drawbacks have prevented the wholesale adoption of trash-to-gas technology in the United States: incineration is polluting, and the capital costs of new plants are enormous. Gasification systems can expend a tremendous amount of energy to produce a tiny amount of electricity. Up to this point, it hasn’t seemed worth the trouble.

Mike Hart thinks that he has solved those problems. In a former Air Force hangar outside Sacramento, his company, Sierra Energy, has spent the last several years testing a waste-to-energy system called the FastOx Pathfinder. The centerpiece, a waste gasifier that’s about the size of a shower stall, is essentially a modified blast furnace. A chemical reaction inside the gasifier heats any kind of trash — whether banana peels, used syringes, old iPods, even raw sewage — to extreme temperatures without combustion. The output includes hydrogen and synthetic natural gas that can be burned to generate electricity or made into ethanol or diesel fuel. The FastOx is now being prepared for delivery to Sierra Energy’s first customer: the United States Army.

[…] The FastOx gasifier is the brainchild of two former engineers at Kaiser Steel, patented by the grandson of one of them and commercialized by Mr. Hart. “It’s a modular system that can be dropped into any area,” Mr. Hart said, “using waste where it’s produced to make electricity where it’s used.” Once it’s off the ground, he said, “garbage will be a commodity.”

From concept to construction, the story of the FastOx is of one fortuitous accident after another. And while Sierra Energy has not yet proved to be a successful company — it will be a long while before your garbage is shoveled into a FastOx — its system has become the first waste-to-energy technology acquired by the Defense Department, which paid $3 million for it through an environmental technology program. (The California Energy Commission, which supports renewable energy development in the state, also gave Sierra $5 million, to cover the portion of Sierra’s costs that the Pentagon couldn’t.)

The military is looking for ways to reduce its oil consumption, and to make it easier to supply the front lines with the fuel it uses in all its vehicles and generators. “These days, the supply lines are in the battlefield,” said Sharon E. Burke, the assistant secretary of defense for operational efficiency plans and programs. “And we consume a lot of fuel, which makes us a big target.”

[…] Now that the Pentagon is convinced that the FastOx will work as advertised, the system should be providing electricity later this year at Fort Hunter Liggett, a small training base in Monterey County, Calif., and fuel for vehicles and generators in early 2014.

“California produces 30 million tons of garbage a year,” Mr. Hart said. “If it decided to turn its waste into clean fuels, at that rate it could meet all its oil consumption needs and still export more fuel than some OPEC members.” That is, if the FastOx can do what no other waste-to-energy gasification technology has done before: take any kind of trash, in any succession, without additional separation or preparation.

Sierra plans to license its technology and to sell systems to make electricity or ethanol from the synthetic natural gas produced by the FastOx. The first will be small and cost about $3 million. But Mr. Hart said he expects to sell larger systems to municipalities and biofuel makers that will go for much more.

Any waste-to-energy plan, however, must overcome a major hurdle: the wild inconsistency of the waste stream. “Until you’ve demonstrated that you can handle it all, nobody’s interested,” Mr. Hart said. “I can understand it; they’ve heard similar promises before. We’ve got 150 cities, communities and businesses lined up to be Serial No. 2. Nobody wants to be No. 1.”

NOBODY, that is, except the Pentagon. The Defense Department is the country’s largest single consumer of energy, spending $15 billion a year just on fuel.

“The mission drives this,” said Ms. Burke, the assistant defense secretary, “and the mission is inherently energy-intensive.”

The FastOx could reduce the military’s reliance on oil overseas and the grid at home. “I have a $24 million-a-year electric bill at Camp Pendleton” in Southern California, said that Marine base’s commander, Brig. Gen. Vincent A. Coglianese. “If I can reduce that cost, that’s more money I can put into training Marines and sailors.”

Ms. Burke added, “Something for military operations has to be really rugged, deployable, simple to use — all of those things.”

Consultants and municipal sanitation officials who’ve looked at the FastOx say it meets those criteria. John Conger, the acting deputy under secretary of defense for installations and the environment, who oversees management of military bases in the United States, says Sierra Energy’s technology should provide energy security for the military in the event of a blackout and provide budget savings as well.

The military’s cost of petroleum, when the costs of transporting and guarding it are factored in, can run as high as $50 a gallon. Moreover, about half of United States casualties in Iraq and Afghanistan between 2003 and 2007 were of servicemen and servicewomen moving and protecting fuel convoys, according to an Army report.

The appeal of Mr. Hart’s Pathfinder system is that it would produce fuel on site, eliminating the need to truck in fuel to dangerous military outposts. It would also reduce the need for trash-burning on bases, which creates pollution and noxious odors that have contributed to locals’ distaste for the American presence in Iraq and Afghanistan.  As a result, United States forces in Afghanistan are working to close burn pits.

“Waste is a problem,” Ms. Burke said. “So if we could dispose of waste and create energy at the same time, that would be a silver bullet.”