Sierra Energy and CEO Mike Hart are thrilled to be listed among the “Upstart 100 Reinventors” list from Upstart Business Journal. The list highlights companies that are shaking up their respective industries. The business journal describes Sierra Energy’s FastOx gasification as a technology with the potential to eliminate landfills and revolutionize the energy industry. They also describe Make Hart’s passion for renewable energy and our mission to commercialize FastOx gasification.

Hart’s passion for the environment and energy was born during his high school years as the nation confronted the oil embargo of the 1970s. After early work on software programs to analyze weapons systems, Hart ran a hydroponic greenhouse, consulted with NASA, and finally set out to reinvent the energy sector. As part of his mission, he’s reinventing the whole idea of how an experimental energy company like Sierra should be run. Instead of building plants himself, he wants to license the technology to others at $10,000 a license. 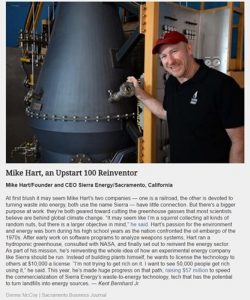